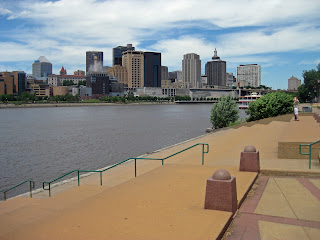 Last week was the 26th annual Mississippi Riverboat Cleanup.  This was just my second year for this adventure.  I can't believe this Twin Cities group has been doing this for a quarter century.  There were 75 volunteers and we removed 1160 lbs of trash, 120 lbs of recycling and 11 tires.  When I looked at the dumpster with our trash, it seemed like it was far less of a haul than the previous year. So, I went back to last year's blog and found that we had removed 3.7 tons of trash.  I think there were over 40 tires pulled out last year.  Our boat cleanup crew cleaned up virtually the same spot as last year which included both sides of the river just north of the 494 bridge.  So maybe next year our Conservation Corps hosts will choose another site for us to work on. More details and photos about the event are on their website.
http://www.conservationcorps.org/newsroom2/2017/6/19/26th-mississippi-riverboat-cleanup 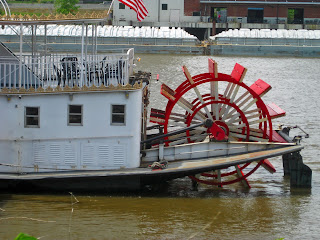 I sat on the back of the boat (ok, the stern) enjoying the trip down river while listening to one of the event's team members tell stories about the river over the loudspeaker.  The stories kind of drifted in and out of my consciousness while I watched eagles circling around over head.  One of those stories that caught my attention was of a train accident from 1912 along the river.  It was a foggy morning and the engineer didn't realize the swing bridge was open and off they went into the river with people and livestock headed to South St. Paul where the folks in town could hear the stricken cries of the animals.
http://www.twincities.com/2015/10/14/from-the-archives-train-headed-for-south-st-paul-stockyards-plunges-into-river/ 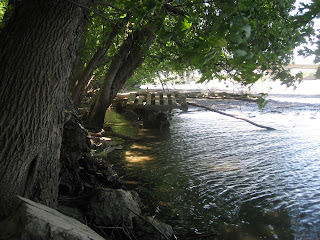 Volunteers on the boat were divided up into 5 work groups.  This year I worked the shady side of the river instead of the steep rocky side.  Lesson learned last year.  Yes, our group hauled out that wooden pallet that got lodged on the tree stump.  Last year I didn't realize that there is a trash contest for most dangerous trash, oldest trash, weirdest trash, etc.  This year I knew to hang on to some bit of trash that might fit into one of those categories.  Last year I found a drug needle but just threw it into my bag not realizing that I might have a winner!  Not going to make that mistake again. 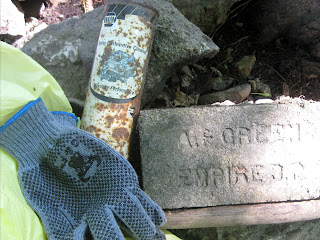 So this year I found that can of carburetor cleaner.  That can looked like it had been there awhile and had a hole worn through it so all the remaining contents of that gets into our drinking supply.  Nice.  I thought I was a shoo in until we heard that one of the cleanup teams on the rocky side had found a hand gun.  Well, there goes my entry for most dangerous thing found.  But....the police were called and it was handed over to them for obvious reasons.  So....if it's not on the boat it can't be entered into the contest.  Darn.  My carburetor cleaner took home the most dangerous win and I selected a nice beer mug as my prize!
Posted by Carla Smith at 3:00 PM No comments: 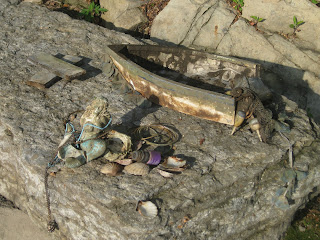 It's going to be another hot day here and the storm from a couple of days ago took out our air conditioner.  So off for an early morning walk before it gets too muggy.  I spotted this little tableau at the beach at First Bridge Park near the Hennepin Avenue Bridge.  I always appreciate folks who leave a little scene like this for me to discover on one of my walks along the river.  There is a story here.  There was a man and a small child.  He didn't make it, but the mermaid took the child to the shore who raised it on sushi.  Many years later.... 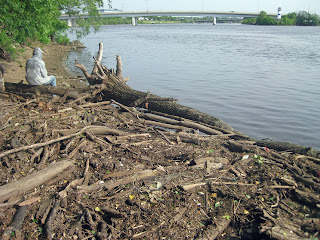 Further along the river at Middle Beach the storm created a big snag of tree trash mixed in with garbage.  The great thing is most of it is easily accessible from the shore. I'm just going to spend twenty minutes here which is about what I can put in one big bag. 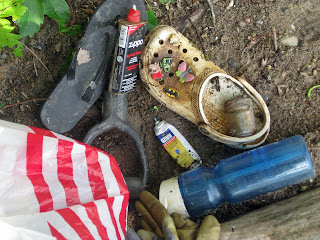 There is always some interesting stuff in the mix of trash.  Cute clog.  That's a handle from a water ski rope.  I'll be back up here next week.  Hope the mermaid is still there next time.

Cleaning in the Weeds 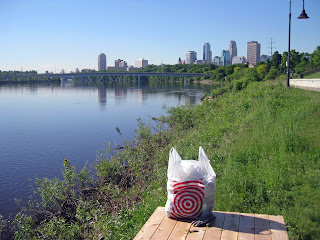 I've had a busy couple of days here walking from downtown Minneapolis to the Broadway Bridge and beyond.  I wanted to get out some of my aggression by picking up Styrofoam bits along the stretch after listening to Trump tell the world that the USA would be leaving the Paris Climate Agreement. 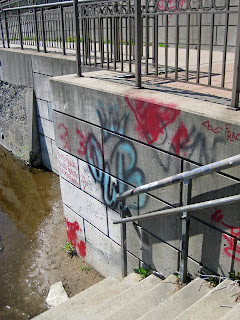 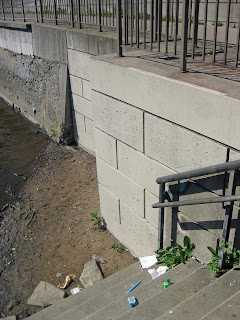 First I want to thank the City of Minneapolis and Park and Rec for their removal of this graffiti at First Bridge Park.  I used the online city graffiti complaint page to ask for this to be covered over because it is neither artistic nor interesting.  The online method is pretty painless.  Take a picture, give the location (street address or intersection) and wait a couple of weeks.  (I did pick up that trash there on the steps.) 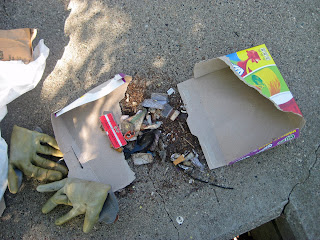 I made a little cardboard dust pan to sweep up this mess.  I left 3 pennies behind. 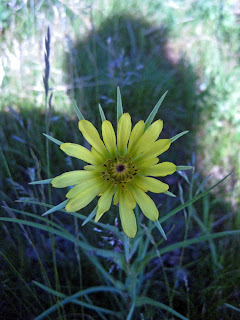 Goat's Beard are blooming along the walking path. 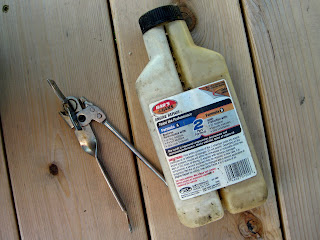 I found this stuff in the weeds near the ramp where the water skiers do their summer shows.  That can opener is an old model.  The engine additive has probably already caused some pollutants to get into the river. 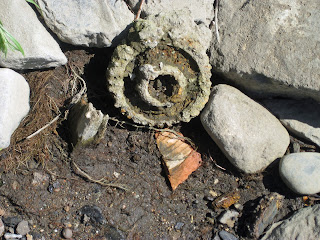 Artifacts...we are just supposed to leave them alone.  I think it depends on what it is. 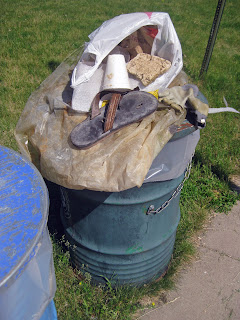 There is always so much Styrofoam along this section of the Mississippi River.  The small bits are such trouble to gather up. 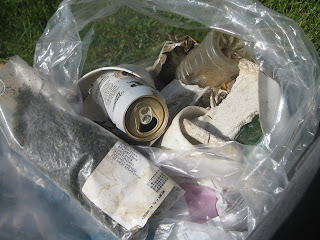 Sometimes I find interesting stuff along the way.  That's a bag of weed just below the beer can.  About 2 cups worth.  What's the street value of that?  Since I was almost to the Park and Rec Office I walked it over there.  The Park and Rec Police office in that same building.  They were not that eager to have me turn it over to them.  They said I should have called 911.  Such a bother.  I should have just dumped it in the weeds and recycled the bag.  Anyway, if you are missing your pot, try the lost and found at Park and Rec.