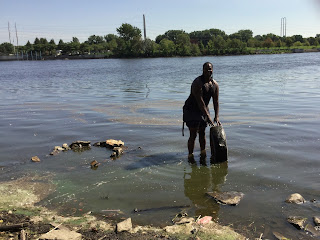 I met this man today.  Albert from Fridley or "Lucky" as he said to call him.  A complete stranger and he was willing to wade out in the muck and haul in that tire that's been sitting at the entrance to Bassett Creek for as long as I have lived in downtown.  I didn't ask him directly to go get the tire, but I did put the thought in his head.  What happened was this.  I was on day four of picking up trash along the Mississippi River.  Lucky was quietly fishing when I snuck up on him with my trash bag. To backtrack a bit, I'd been working the beaches on both sides of Bassett Creek and further up river to the water ski area.  Yesterday, day three, I was here where Lucky is standing. I call this spot Fisherman's Point. 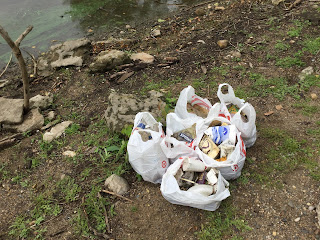 On day three, I filled those six Target bags twice over, depositing the junk in the Park and Rec barrel and heading back down the path to refill. What a mess. 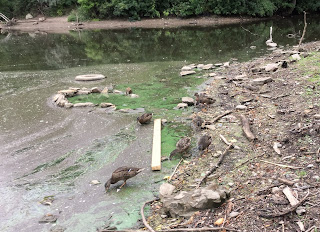 That tire out there in the creek was bugging me, but seriously there was nothing I could do about it personally.  Today I was intending to hit another beach but thought I would just do one more sweep of this area.  That's when I met Lucky.  Fishermen are usually in their own quiet zone of contemplation and I apologize for butting into that moment.  We discovered we both had lived in the state of Mississippi years ago and I told him about the cleanup project that is taking place on the Pearl River that runs through Jackson.  Before I knew it he was offering to wade out there and get that tire and roll it up to the parking lot a few hundred feet away.  By the time we got up there he was a muddy mess but I wanted to shake his hand anyway. 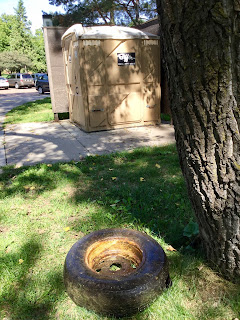 We left the tire by Biff's house.  I called Park and Rec to tell them to come and get it.  I tried to move it a little for a better photo op, but couldn't budge it even just a smidge.  The rim was still on it and it was caked with mud.  Lucky and I parted ways.  He was headed back down to the river and I continued on to my next cleanup spot.  Park and Rec had that tire out of there an hour later.  It was definitely my lucky day.
Posted by Carla Smith at 12:44 PM No comments: 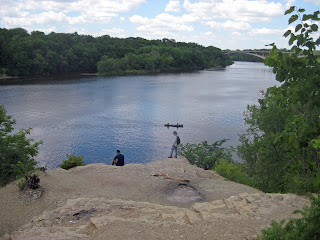 The Mississippi River gorge is probably my favorite place to take a walk in the Twin Cities.  Located in the city, but definitely makes you feel that you are not in the city.  One goal I've had is to walk and explore both sides of the river from the Ford Parkway all the way into downtown Minneapolis. Roughly that is a 12 mile loop or so.  I may not have gone down every trail, but I've walked most of them now. 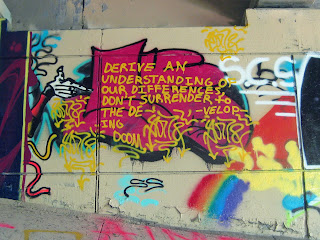 A couple of weeks ago I was hiking in some of the areas of the gorge that I had missed.  On the St. Paul side of the river near the University of St. Thomas is an area called Shadow Falls Park.  I had been wondering what was underneath the bridge that crosses East River Parkway.  I was there last summer at some point but didn't go down the path to see what was in the ravine.  I can check that off my things to do list now.  There was graffiti of course, and I liked the message here.  "Derive an understanding of our differences, don't surrender to the developing doom". 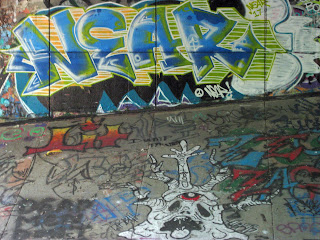 And I enjoyed this blobby little character too.  Perhaps it was painted by someone just finishing a science class on germs and diseases. 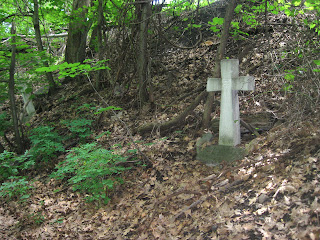 What I didn't expect to see was a grave marker a little further up the ravine away from the river.  There were a series of crosses so we followed them along the path. 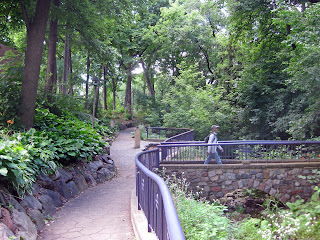 There were five or six grave markers and my first thought was "this is weird", but walking up the ravine led us to this peaceful, beautiful little grotto.  If we had walked back down the ravine to the river, I think we would have come to the falls at Shadow Falls Park.  Instead we walked to the overlook where a guy in a Hawaiian shirt was serenading folks with his bag pipes.  A volunteer was collecting trash and I thanked him for his efforts. 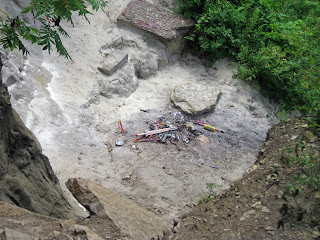 There was some trash left over from a party that was too far down the cliff for either him or me to climb down and retrieve. 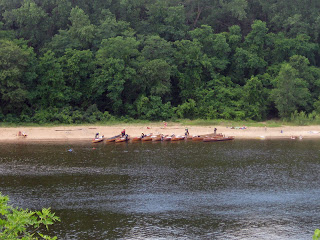 Across the river on the Minneapolis side, there were a bunch of canoes and folks enjoying the beach.  My guess is the canoes were from Wilderness Inquiry, a group that offers canoeing opportunities on the river.  I've been to that beach and generally people refer to it as the Lake Street Beach.  There were 4 or 5 people swimming and I always wonder about swimming and water quality issues here.  Eventually, I hope, we will improve the water quality on the river to the point that swimming here will be a more normal activity. 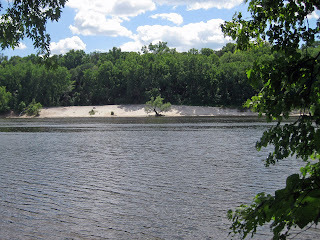 A little further up river is another beach called White Sands Beach.  Now there is a spot I didn't know about and had not explored. 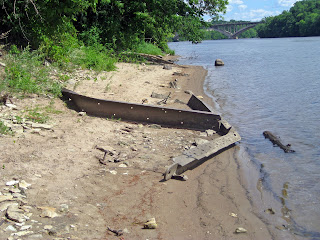 I walked back home and picked up bits of trash all the way to the U of M before hopping on the light rail for home.  I did not take that bridge girder with me.  Exhausted, but ready to find out about White Sands Beach on another day.  Although this article is 4 years old, it still perfectly describes the area here.

https://www.minnpost.com/stroll/2013/09/river-beaches-are-caught-between-minneapolis-conflicting-views-about-mississippi
The article's author had his views on swimming in the river too. But that was in 2013.  "Not everyone in Minneapolis is a river beach person, though. River beaches are an oddball country cousin to the lake beaches. They're a little scrappier, a little less recreational, a little more hard-edged. For one, no one’s swimming. Almost everything about the Mississippi is too dangerous for swimming – if the currents don’t get you, the mercury and polychlorinated biphenyl will. The waterways along the stretch of the Mississippi River between St. Anthony Falls and the Ford Dam are generally considered “impaired.” It’s pretty common to see people recreationally fishing in the river, but it’s rare to see anyone splashing around." 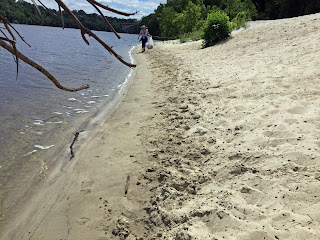 A couple of days later I was on the other side of the river trying to figure out how to get down to White Sands Beach.  White sand and steep just like it looked from the St. Paul side of the river just days ago. 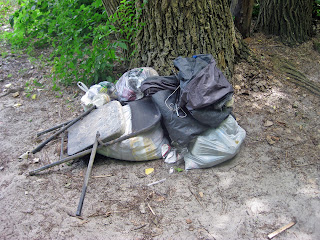 Someone had been picking up garbage but had not taken it back up top yet. The beach was reasonably clean but you can always find more stuff. 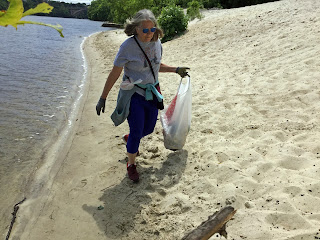 I picked up a bag or two and carried my haul back to a Park and Rec barrel before heading home.

Posted by Carla Smith at 9:42 AM No comments: