The Journey of the Blue Barrel 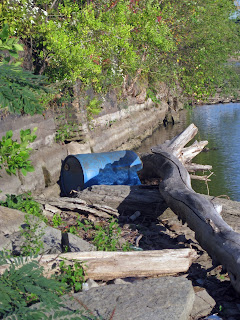 A few weeks ago I was down on the beach opposite the Post Office and south of the Hennepin Avenue Bridge and I noticed this blue barrel that was wedged in some tree debris.  I was not going to try to bring it up.  A few days later we had a pretty good storm. 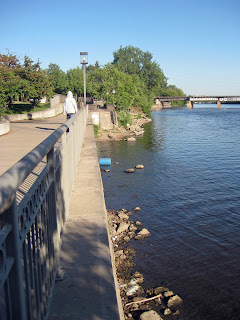 The next day I noticed a blue barrel upstream on the north side of the Hennepin Avenue Bridge.  I walked back to the Post Office beach where I saw the first barrel.  Not there.  Ok, it's the same barrel and the wind just moved it against the current.  The power of wind and water. 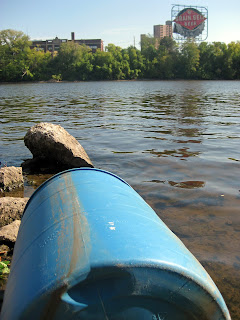 No, I didn't swim out after it.  It eventually made its way to the beach where other trash floated in as well. It's plastic so no wonder it floated upstream so easily. 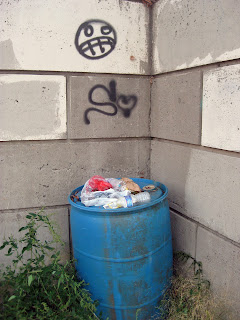 I left it in the corner at First Bridge Beach.  Days later when I looked for it people had started using it as a makeshift trash can.  This just confirms my thoughts that we need more trash cans. 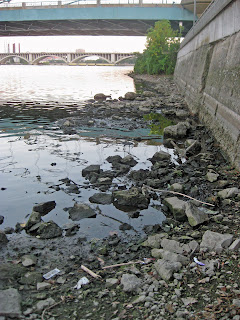 Today I was back over there.  Blue barrel is still in the corner but what you really notice is how the water level is going down. (Compare it to my second photo!)  The area under the Hennepin Bridge is now accessible to me.  The water along the wall is about 2 inches deep and it doesn't take much effort to hop across the rocks that have been exposed.  This was one of those areas that bugged me to no end last spring when I started my obsessive trash cleaning.  I thought I would need a canoe or a rope ladder. Who knew that I just needed to be patient and let nature do its thing.  I hauled out a couple bags of trash but that's not even half of what's there.  There was the usual stuff plus a fishing pole and a Virgin Mary picture frame.  Now that the water is really low you can see that there is a lot of old metal junk laying in the water.  What got dumped here?  I wonder how much of the Mississippi River in other states is like this?

Over the Fence Part 3 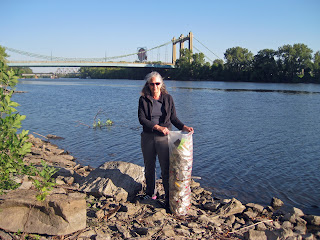 I'm still working the area along the river by the Post Office.  One more bag would probably get this area relatively clean.  Now, it's a lot of small stuff like bottle caps and small bits of plastic junk (the kind that birds like to eat.).  A lot of the litter down here I'm sure has washed up from communities further upstream, but not all of it.  Even though you have to crawl over the guard rail to get down here, people do and they leave their stuff.  Up top there is no trash can.  There are ones further upstream and downstream but just far enough to make it a little inconvenient.  I realize that every additional trash can placed in the city adds to the expense because it's just more labor to empty them.  Sometimes though you just have to have additional cans or at least better placement of the cans they already have.  One spot that really bugs me is the corner of Hennepin and First St.  That is the north corner of the Post Office.  There is a bus stop there.  There is no trash can. 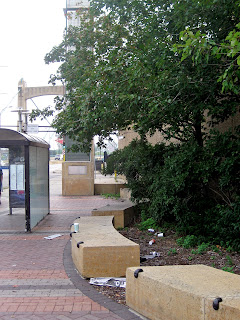 I walk by here to get to the river and the shrubs are constantly littered with trash. Occasionally I pick it up. There are usually liquor bottles in the one corner so I'm pretty sure that someone is finding this to be a convenient place to party.  Honestly, I don't know if this is the responsibility of the Post Office or the City of Minneapolis.  Directly across the street is another government building, the Federal Reserve Bank. There is a bus stop on their corner.  There are two trash cans.  Their grounds in front are one of the most well tended and beautiful in all of downtown.

Posted by Carla Smith at 9:24 AM No comments:

Over the Fence Part II 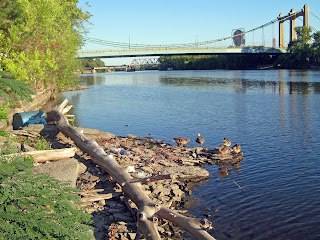 Last spring I went over the guard rail to this little area between the Hennepin Bridge and the Third Avenue Bridge. In the spring part of it was still underwater so I couldn't work on the far end.  There's a blue barrel over to the left pinned into the corner of tree debris.  That will probably be there until someone shoves it back out into the river and it makes its way into the lock and dam. 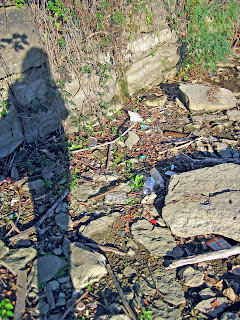 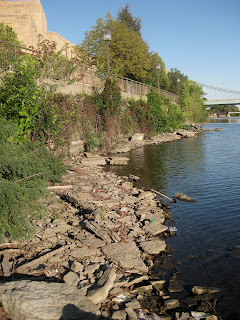 That's the old Post Office up there on the other side of the guard rail.  Once you're over the fence there is a little path that someone has worked to clear out.  I brought two large garbage sacks with me but after 30 minutes decided I wasn't going to finish and stopped after I filled up the one bag.  There was the usual stuff plus sunglasses, fishing lures, a baseball, and an old radio. 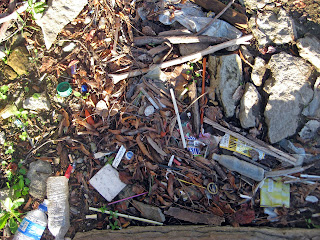 The garbage is thick down here. 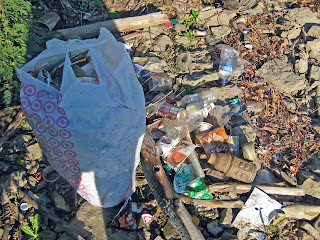 The thing that I find interesting about this spot is that tourists come here from downtown to look at the river. I see them look at the river and then look down to the garbage.  They look horrified and probably a bit surprised.  Maybe expecting better from Minnesota.  We can spend $$$ on the new Viking's stadium just a few blocks away but can't seem to clean up our own riverfront. 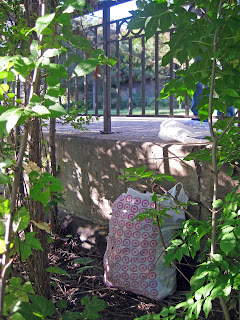 Back up through the clearing.  Enough for one walk.
Posted by Carla Smith at 8:57 AM No comments: 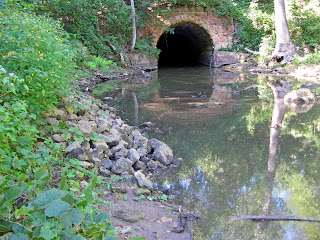 One of my goals this past summer has been to get down into Bassett Creek on the south side.  I figured this is the driest it's going to get down there for the year.  Climbing down the rocks directly under the bridge seemed like the easiest way to get into this spot. 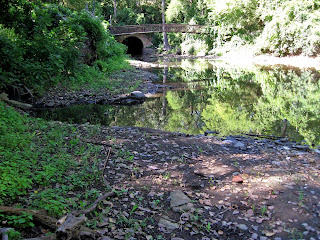 I brought my grabber (practically useless piece of poorly made crap from Menards!!!) to pull some of the stuff out of the water.  Plastic bags, bottles, cans, all the usual stuff.  What you really notice down here is all the broken glass.  Glass everywhere.  Years and years of broken glass bottles.  Like there was some kind of tradition to stand at the top and throw your bottle down just to hear it smash.  I started to pick some up.  It was making my bag too heavy so I stopped and just got the plastic.  And I wonder if I really need to get that glass anyway. Maybe just leave it.  Maybe in 50 years it will turn into sea glass or creek glass and it will be highly prized. 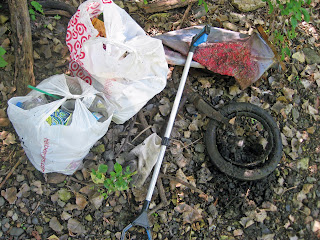 I found a broken up painting with the paint falling away from the canvas and the front end of a kid's trike.  I threw those things a little further up the hill for later retrieval and got myself back up the ravine by holding onto tree branches and vines.  I don't think I'm coming back down here anytime soon.
Posted by Carla Smith at 1:49 PM No comments: 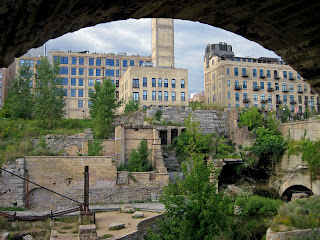 We walked down to Mill Ruins Park this morning.  There are some interesting views of the city from here. 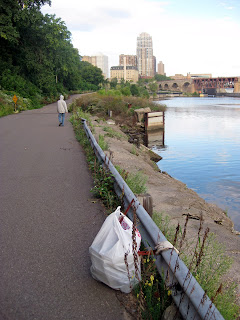 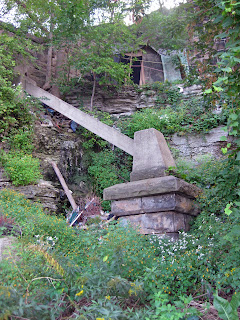 You can walk along the river (still park property?) until you get to the gate for the St. Anthony Lock and Dam entrance.  Although there are still walkers and joggers down here it feels a little dicey.  The area needs some work.  I wonder how long the tent up in the cliffs has been there?  There is a pretty good trash heap at the bottom.  It's right in front of the gate so the chances of it being unseen by anyone else is slim.  We picked up a sack of litter and walked back towards home. 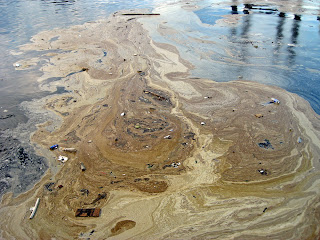 I suspect most of the garbage on this end of downtown is coming out of the storm drains. 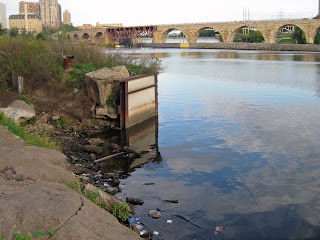 That's the Stonearch bridge there.  There were plenty of walkers and bikers (no cars) commuting to work across it this morning. 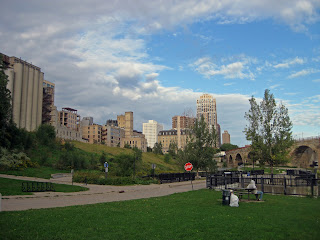 Add our litter contribution to the trash pickup and head back home. 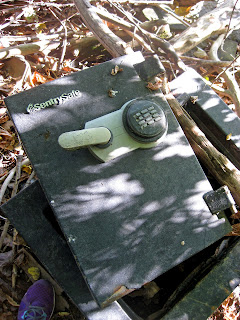 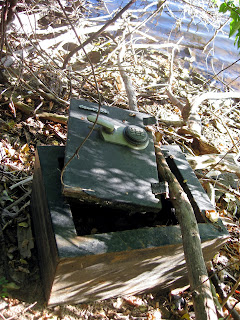 Jackpot! Loose diamonds and Bearer Bonds on the beach this morning.  See what happens when you work hard!  Maybe there was a home invasion upstream.  The crooks got away with the safe.  They put it in their boat and came downstream to this deserted beach where they opened it while celebrating with a six pack and Swisher cigars.  They really only left me with the trash.  I could probably take the door with me sometime but the rest of it is not going to make it up the hill I had to climb down. This was a relatively new beach for me.  It's directly down the steep slope behind the....oh wait, I'll keep that to myself until I do a more thorough job of looking for the loot.  So far I only found one pink flip flop and a pair of sunglasses. 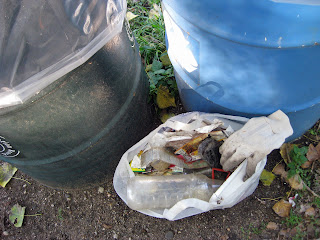 Posted by Carla Smith at 9:32 AM No comments:

I've spent a little time on all of the beach areas in my "adopt a river" mile this week.  I thought I had wandered into someone's camp for a minute and was going to leave when I realized it was just an abandoned broken chair.  When stuff like this gets left down here the spring flooding will sweep it up and take it downstream along with other garbage and debris from downed trees.  I took the chair bag and left the chair in a spot where I could grab it later.  It is now sitting next to that stove top that I don't know what to do with. 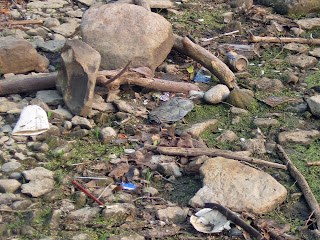 With low water levels so much trash in the mud is exposed and easy to be picked up. 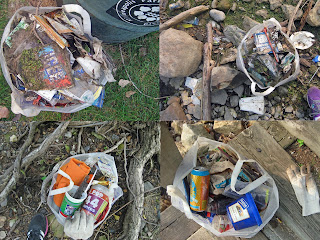 As the summer is quickly coming to an end I am starting to contemplate what I need to do before it turns cold.  There is still a mess on the south side of Bassett Creek.  I think I will eventually be able to scoot down the hill and pull that trash out but for now it is too muddy.  The traffic of people using the park will start to decrease soon.  Once my mile is clean, the question is how to get people to pick up after themselves.

Posted by Carla Smith at 8:16 AM No comments: